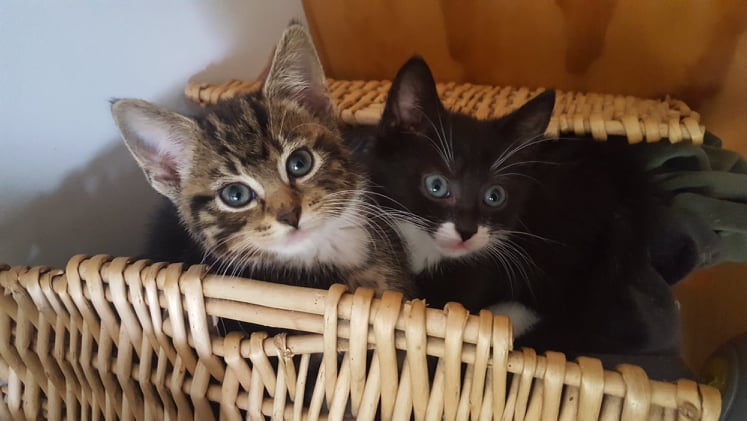 Summer is kitten season and this year, rescues all over our city were inundated.

Mostly, these days, any kittens are desexed before they go to their forever homes. There are some great desexing programmes being funded by some very wonderful people - but their five-year plan of no unplanned kittens has been slowed by COVID lockdowns.  Vets were closed for anything other than emergencies and rescue operations were reduced, resulting in a surge in kitten numbers this season.

We do a bunch of rescue work. It's not unusual for us to have random animals in various states of rehabilitation around and since we had space and energy I said okay to the youngest in the family's persistent pleas to foster kittens over the summer.

With the proviso that we could foster as long as the kittens were healthy, within hours of contacting the rescue I picked up two scrawny wee mites from Sarah at the Pet Whisperer Rescue Trust. They were named Adelaide and Arizona by the rescue. Sarah reckoned they were about four or five weeks old.

They'd come from the Jet Park Quarantine facility in Auckland and because their colony was behind the quarantine fence, rescue volunteers couldn't feed or complete the desexing programme, or do welfare checks. Luckily, someone working at the hotel took an interest and these two had been found, apparently orphaned.

There's a stand-down period where you keep foster animals separate from your animals in case they're sick. We have a great set up here and we settled the little ones downstairs.

Within a week, these two little ones were fighting for their lives. I spent weeks cleaning up diarrhea, up at night monitoring them, preparing meds and special food, bathing them several times a day, cuddling them as they lay listless. It was full-on. And awful to see two young things so deathly ill. The vet identified coccidia and they were on some seriously kick-ass meds for it. They were in and out of the vet and spent a week back with the lovely Sarah from the rescue spent whole nights monitoring them hooked up to an IV drip into their tiny little veins, before they came back to us.

It took weeks for them to come right, and another few to get a shine to their coats. All that worry and those sleepless nights were not what I signed up for but it was such a joy to see them play and do all the kitten things again.

Totally recommend fostering if you can - it's a great way to be of service and do some good in the world. Most kittens aren't as sick as ours were so don't let that put you off! Most rescues will provide everything you need and once the stand-down period passes, the kittens are integrated into your household. Adelaide and Arizona brought so much energy, fun and laughter into our lives. Fostering is a great way to have some kitten or older cat time if you're not in a situation to be able to provide a forever home. I have friends who travel a lot but settle for months at a time to foster. Another who lives in a national park and doesn't want to have a cat because of the birdlife, but fosters stay inside so she does that instead.

Or, if you can't foster, donate product or financial contributions if you're able. You can find Pet Whisperer Rescue Trust HERE, but there are loads of rescues, there will be one near you and they all do such great work - mostly for the love of it. It's a hard job and your support brings some light, so give if you can.

Adelaide and Arizona were with us for two months and they've gone to a beautiful forever home with their people now - we get updates and videos of their antics. We're so glad they have a home together, they're pretty close after going through so much together.

Our animals were great with the kittens but are quite enjoying the peace and quiet now too I think!