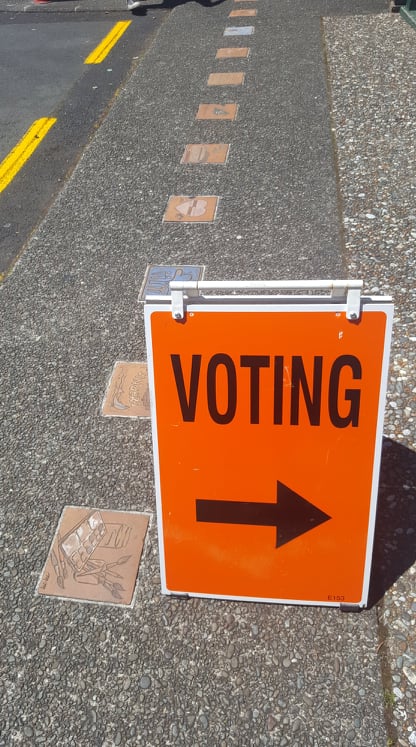 Early voting has been open for awhile and we had a record turnout all up.

I took the boy with me to vote. We had to make a special trip into town for it but I wanted him to be part of the election, have voting normalised, demystified. Mission successful.

It's a strange time, the build-up to an election, where it's all about the media and the politicking, rather than the issues and the work itself.

The polls failed to predict the Labour landslide. For the first time since we adopted MMP, a party can rule by majority. Labour won 64 seats, Labour candidates nudging long-standing National MP's out of key rural electorates. Special votes are yet to be counted, but results are unlikely to shift much. Greens won 10 seats, as did ACT (shudder - pro-guns and a quick flick through their candidate list revealed a sad lack of diversity) and National got some, but I can't remember how many. Ha!

There was much talk of a Labour/Green government prior to election day. Many people I know party voted Green and candidate voted Labour, in an attempt to not have National gain and to support the Green/Red coalition idea. Otherwise those votes may well have gone to Greens or the Maori Party, or other parties. Now that Labour have the majority, the bets are on about how it will all shake down over the next few weeks.

Will Labour ask Greens to govern- and if yes, will they accept or will they be in opposition? There are interesting cases to be made for each.

So, we wait to see what government looks like.

There's a lot to do. Unemployment is climbing, inequity is glaring in many areas in NZ life, our freshwater is polluted, the child poverty that mobilised Jacinda Ardern into government still exists, we're in the middle of a pandemic and climate change is a threat to us all.

Some kids leave school unable to grow and cook good food, I'd like to see government funding for vital life skills like this. More support and/or educational opportunities for differently wired kids. I'd like each incoming MP to spend time with a lower-socio economic household to hear about their reality and then a super-wealthy one to hear the same. To visit the mining sites in the Coromandel, to spend time on a deep-sea trawler, and a day with the amazing folks working passionately on climate change issues. I'd like to see us invest in resilience and community building projects with a focus on local food security.

For now, I'm celebrating the success of Chloe Swarbrick from the Greens, who won Auckland Central!

And fan-girling the amazing Marama Davidson, co-leader of the Greens, and the new MP for East Coast Kiritapu Allan.

Also, NZ is now the gayest parliament in the world. I'm proud of that.