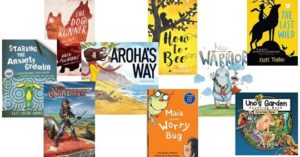 I am a believer in direct action and using your voice for those who cannot speak or who have been silenced.  Way back in 1995, I co-organised The Direct Action Conference alongside COP1, the first United Nations Climate Change conference in Berlin. After being arrested, ( a few of us had kryptonite D-locked ourselves to a delegates bus, trying to get climate change in the media, the projections even back then, were scary) I had a bit of time to think.
When conversation with my cellmate, Anika Jones from Greenham Common, faded out, I was left to my thoughts. I remember wondering what the world would be like if our voices went unheard. How would the next generation, the kids, feel about inheriting a damaged world, all because of human greed and ignorance? I thought about that time in that jail cell while I was researching and compiling a book list on Kids with Climate Change Anxiety for The Sapling.

I can’t tell you how much I resented writing that piece. But it’s important work. Necessary. If you don’t know about The Sapling yet, go and take a look around, it’s a special place. The booklist on Kids Anxiety around climate change on The Sapling is HERE.

And there’s a documentary covering the Greenhouse Gathering, Direct Action conference and COP1 HERE, featuring talented activists and social change agents, Paxus Calta, Stephany, Mark, Adam x, Anika, George Monbiot, Hester, Vladimir, Rebecca, Davor, Rod Harbinson and others. Many of these fabulous people have devoted their lives to lobbying, campaigning and working for positive change. Some are well known internationally, some in certain circles, but they are all heroes. People have been working, mostly invisibly, although passionately, for the last thirty years. It’s hard to live on the frontlines of climate science for so long and be desperately trying to think of ways of how to reach people, how to make a difference and get humans to act responsibly. So much love to all those people who have been waving that flag for all this time.

I am at 4.15, 5.41 my son tells me. And that’s me with my D-lock being removed from around my neck with an angle grinder. This doco came to light recently, I remember the filming but never saw the finished piece. On seeing it, my son said ‘Mama. You are cooler than I thought’. Funny.

My highlights are the ever eloquent Stephany at 7.30 and Paxus on why direct action is important at 20.37. Imagine if they had listened to us and so many others back then and taken meaningful action. Imagine.