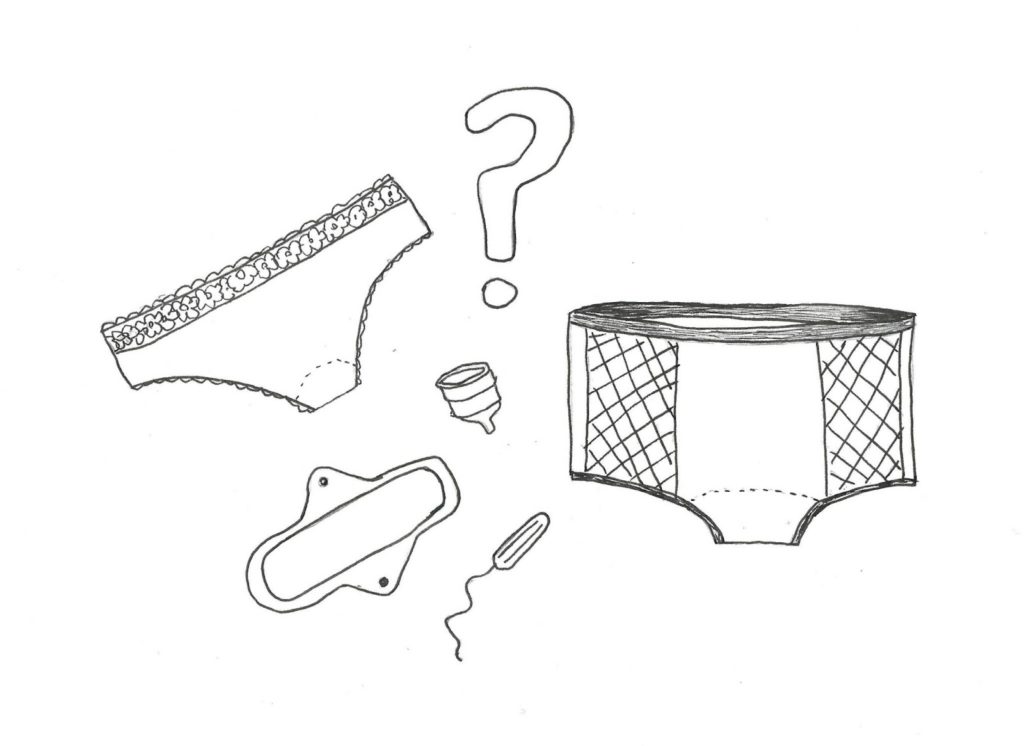 Call me an early adopter but I’ve used a Mooncup for years.
Like, lots of years. I used to teach workshops called the ‘Politics of Blood’,
in which we discussed using different blood catching methods. Most of the
attendees had never before spoken or heard said aloud the words vagina or vulva
outside of the doctor’s office.

There are a bunch of reasons why I went off ‘sanitary products’.
One of the things we did in those workshops was putting a popular brand tampon
in a clean jar of water. Toward the end of the workshop, we’d give it a shake
and pass it around. The water changed colour and had all sorts of
fibres and random particles floating in it. Pretty ick. An eco-activist and zero waste advocate at the time, I found the
chemical processes in producing that bleached white cotton (and the waste) repugnant. There was
that awful sucked dry feeling after using tampons. Then there was the cost. Have you ever done the math? It adds up quick!

I had always hated the feel of pads, so reusable pads were out for me. A lover turned me onto sea sponges. Yup. You read
me right. They were awesome actually, but I was happy to switch to a more
environmentally sound solution, the menstrual cup. Mooncups went on the market
in 2002 and I was one of the first in line. Truly re-usable, these last for
years. There are loads of menstrual cups on the market now and they’ve been gaining in popularity. I love mine.

And now there’s a new thing. Period
underwear!
Heralded by US company, Thinx, there is a flood (pardon the
pun, couldn’t resist) of period underwear on the market. NZ has I am Eva and next
door in Australia there’s Modibodi. They’re not just for catching blood, but any kind of leak. Women who struggle with pelvic floor post birth, this could be your thing!

As anyone who bleeds on the regular will tell you, that
heaviest day of bleeding can be a worry. If you’re travelling,
have a big day at work or just have to be on the go all the time, there is the concern that you’ll leak. I well remember the stress about this at high school. Some women find period underwear gives that extra bit of reassurance.

I have
some teen friends who are loving the period underwear. I know others who use
the heavy flow ones overnight, or who use the light flow ones as a backstop on
busy/heavy flow days or to catch the drips as their bleeding is almost over.
Some use them exclusively, taking a wet bag with them and doing a change in the
loos halfway through the day, others as back up to their menstrual cup. I know a menopausal woman who never knows when her bleeding might descend and so wears a fabulous pear of period underwear every day, just in case. They even come in g-string design.
And how brilliant would these be in those incessant weeks of bleeding after giving birth? Pretty damn fabulous. Give me a pair of sexy period underwear over those hideous maternity pads any day.

I just got my period underwear in the mail today. After being put off for years by the outlay, I bought some Modibodi
ones through a special deal that Emily from Raising Ziggy organised. (Thank you!) The great thing is that function aside, they’re awesome underwear,
some are even lacey. And I love that there are more zero-waste choices. The
best explanation and review of period underwear I’ve seen is by Emily over on
the Raising Ziggy blog HERE.

Did you know that there are girls around the world who can’t
go to school or be out in the world because they rely on rags, mattress stuffing,
moss or even cow dung to catch their bloods? All power to you if that’s your
thing, but bleeding monthly should not get in anyone’s way of having a good
life and doing the things they want to do.
There are some awesome Period Poverty projects around.

Days for Girls just opened a local chapter here, there are groups
all over- they bring together women to make re-usable pads and bags to send to
those that need them.

Which brings me to The Good Fund. A team effort between Emily
from Raising Ziggy and Kimberli from MyCupNZ, they are breaking down the cost
barrier to women accessing re-usable menstrual products. You can buy, donate or
take part in the huge nationwide Fill-A-Bag fundraiser. Check it
out HERE.

And finally, those fabulous women from On the Rag can now be seen on screen! Yes, they’ve gone all TV. And the first episode is on PERIODS!