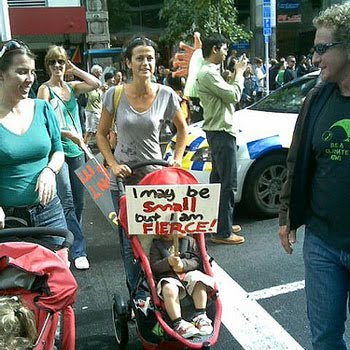 We know this wee fellow and Jed was rather taken by his placard. He made me read out what ‘the words spell out’ many times and each time he would just crack up laughing.

This morning i showed Jed all the pics and TV 3 video footage from the amazing 50,000 strong (that’s amazing for NZ) march that was held on Saturday to protest the national (think republican but with nz flavour) government’s new scheme open up huge tracts of core conservation land and the people’s parklands for mining.
It looked like an amazing day. I knew it was going to be a goodie (nothing like getting out there on the streets) and was gutted to miss it. It was fun pointing out to Jed all the people i knew in the media coverage though. Once upon a time it might well have been me with the megaphone.
I told him in terms i thought he could sort of comprehend what mining was and what the impact would be on the wildlife and people and we talked about what we could do to tell the government NO. All in a fairly lighthearted way – not to depress a two and three quarter year old. I told Jed i’d be writing a submission tonight (embarrassingly i hadn’t done mine yet, despite encouraging many others to, ahem). Out of the blue, after dinner Jed suddenly said….
“Could you tell all the mining guys to not mine, because i love my land”.
That kid blows my mind on a regular basis.
Join me in making a submission.