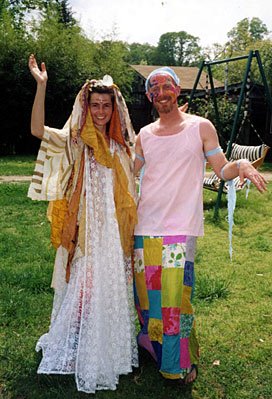 Awaiting the Beltane ritual at Twin Oaks Community – i was the element air in case you were wondering and thats my friend Dream. Yes, really!

On Fridays, when the spirit moves me, i plan to wander down memory lane…a chance to remember people and places, a chance for me to keep alive wonderful pieces of me and my dances with others through the years. An attempt to reconcile this new growing into mama-me with the wild haired free-spirited drifter woman who lived and worked in over twenty countries, up mountains, on the street, in tipi’s, benders, vans, squats, tents, on communes, the occasional house and organic farms.

For today, a taster. Snapshots from my illustrious past. A brainstorm of post titles to come. (This’ll buy me a week to get my scanner operational – i hope.)

– Getting sawn out of a Kryptonite bicycle lock attached to the 1995 UN Climate Change Summit delegates bus. (Part one)
– Thoughts from a jail cell. (Part two)
– Co-parenting willow and the Star Family. Four adults all in open relationship, parenting together.
– Organising a major eco-peace event on a beautiful island in the war zone that was the Balkans in the early 90’s.
– Rituals: landmarks of the year turning and a chance to reflect on life. 100 people dancing around huge fire singing at the tops of their lungs – it’s an incredible thing.
– Stories it amazes me i survived from my wild teenage years. (Otherwise titled ‘ things i hope Jed has the wisdom NOT to do when he’s a teenager’ …but secretly kinda hope he will.)
– Living on the land in the French Pyrenees – cutting wood by handsaw, harvesting wildfoods, no electricity, learning plant lore and coming to terms with my bathroom being a freezing river.
– My crafting through the ages: most notably the handsewn dress that began life as a tablecloth in a rubbish bin.
– Musings from the gutter – living on Europe’s streets. Homeless, but by choice.
– Double agent in London. Nanny by day and radical activist by night.
– Stories from the herbal frontlines. And i mean strictly medicinal in the purist sense or culinary.
– Living on a commune. Life, loves, laughter as well as: frustrations, freedom and a few expletives. 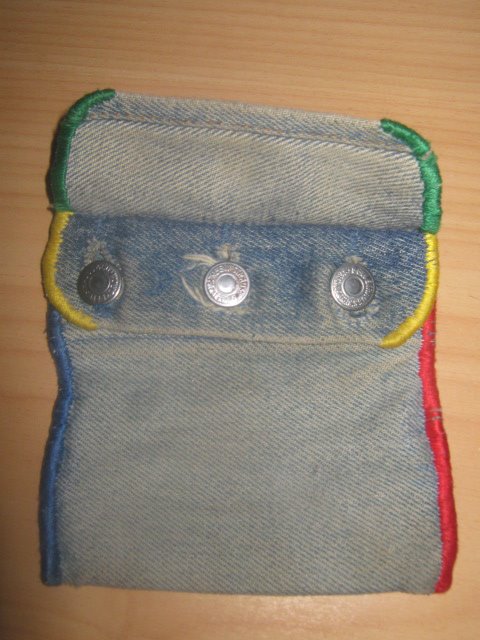 A craft from the past. I made this wallet/purse creation by hand, with recycled denim. Ten (okay, maybe seventeen) years ago, when not on a soap box or street performing, or trying to learn new tricks, i’d sit and create these and sell them from the side of the road. Very labour intensive but it fed me. This one has seen hard wear for all that time and is still going strong.
It’s been a full life, taken by the horns and shaken for all its worth. No regrets, even with the stumbles and falls. ‘Cause that’s where i learnt the most. (Not always gracefully, nope). And for the record, i am happy to be in one place for awhile. I am only sad i live so far from many of my tribe: the kaleidoscope of incredible people i have crossed paths with over the years.
And yes, i do realise it’s Saturday. I had intended to post this yesterday, but it was my birthday and i got well, kind of distracted. A very pleasant evening it was too.